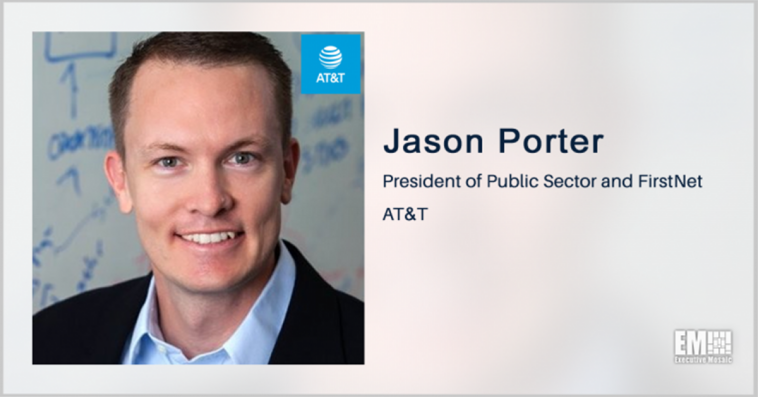 ExecutiveBiz recently had a chance to sit down with Jason Porter, president of AT&T’s public sector and FirstNet, for its latest Executive Spotlight interview discussing his recent transition into the role as well as the impact of a VA modernization task order win, the company’s momentum moving from network services to EIS, improving federal agency infrastructures, 5G experiments and more.

“One of the biggest challenges agencies are confronting is moving to a hybrid public-private cloud solution. Not all data and applications are maintained in their brick-and-mortar environments anymore. We help them explore solutions like AT&T NetBond, which takes high-speed VPN and security and connects that to the cloud and makes it instantly scalable. NetBond extends security and capacity across the network infrastructure.”

You can read the full Executive Spotlight with Jason Porter below:

ExecutiveBiz: You assumed your role as president of AT&T’s public sector and FirstNet back in February. What has the transition been like over the first few months? How would you describe your vision and what is the most exciting aspect of your new role?

“It has been an exciting several months for me. I’ve been leading FirstNet at AT&T for almost two years and, last September, I was asked to lead the Public Sector as well.

This is a personal passion and dream job in many ways. Service to our country is personal to me. After graduating from West Point as an Army Officer and transitioning to the private sector, I found I was missing my direct ties to service. This role allows me to fill that gap more than my previous private sector roles because I’m able to serve those who serve us.

In my current role at AT&T, I have the honor and privilege to help lead our commitment to serve our first responders, the public safety community and the legions of public sector leaders and workers who serve, defend and protect this country every day. I strive to have a service mindset and ensure they have everything they need to do their best job, save lives and deliver their missions.”

ExecutiveBiz: Congrats on the recent VA modernization task order win! What are some of the most significant improvements that AT&T’s programs will bring to the VA, our nation’s veterans and the federal sector’s networking capabilities in the future?

“Personally, helping veterans is a passion. Many of my former classmates at West Point are served by the VA every day. One of my company mates was hit by an IED on deployment and spent a good portion of his life recovering from that, with support from the VA. So, my mission as it relates to the VA is personal and one I take extremely seriously.

Like other organizations across the public sector, the VA is modernizing its information technology infrastructure. We are heavily supporting the VA in those efforts. We are working to strengthen the VA’s cybersecurity protections and increasing connectivity to more locations to support remote work and help VA operations like call centers operate more efficiently.

The VA is adopting mobility and 5G solutions. As they transform their technology capabilities, our role is to help them solve critical challenges. For example, we are already assisting them in modernizing their networks and data management is absolutely critical to the way the VA works. They have access to AT&T fiber at every VA location globally, consisting of 1,255 healthcare facilities, 170 medical centers and 1,100 outpatient sites.

It is a big task keeping the VA connected and modernizing their infrastructure. We are right there supporting them in their goal to manage veterans’ healthcare records in a new and different way, moving away from paper and fax to a robust broadband solution that allows them to move rapidly.”

ExecutiveBiz: Federal agencies are moving from Network to EIS and AT&T seems to be winning a significant share of EIS task orders.  Can you share a bit of insight about your momentum in EIS?

“We’re very proud of the degree to which we are able to partner with federal agencies to help them deliver their missions. We’ve won nearly three dozen EIS awards already and we’re in competition to win at least double that in the future.

I don’t think about our EIS contract awards as a win for us; rather I liken them to a teaming agreement. We essentially join the IT team at the federal agency in question to help them execute, modernize and transform. We become a one-stop shop for their communications needs.

There’s a parallel from my military experience. We are like a Signal Officer for these federal agencies, where we can be that trusted source that will help keep them connected today and help keep them on the forefront of advanced communications capabilities as they move forward.

Being that one-stop shop is really valuable. It helps them reduce their procurement time and costs and streamlines acquisition and implementation, which is a big challenge for agencies as they migrate to new technologies.

I am just super proud to be a significant contributor to the agencies that we serve and to become their teammates as they move to EIS.”

The pandemic challenged everyone, but the core challenge to the public sector agencies we have the honor to serve is transitioning into modernization efforts. I’ve seen several technology shifts throughout my career: it can’t be a comprehensive “jump in with both feet” into new technology. There’s always a transition phase where it’s necessary to keep current infrastructure up and running while phasing in the new infrastructure and advanced capabilities.

During a transition phase, you’ve got to manage the balance between the current and the future. It’s complicated. It really is an art, not just science, as you adopt new capabilities and take on new customers while managing that existing base. It is a delicate dance, if you will. We play a valuable role by being the consultant on the team who can help choreograph and guide agencies through the transition.

We have a breadth of customers that are going through similar transitions. We bring and share best practices and the learnings from the challenges we’ve gone through to help agencies succeed in their transitions.

One of the biggest challenges agencies are confronting is moving to a hybrid public-private cloud solution. Not all data and applications are maintained in their brick-and-mortar environments anymore. We help them explore solutions like AT&T NetBond, which takes high-speed VPN and security and connects that to the cloud and makes it instantly scalable. NetBond extends security and capacity across the network infrastructure.

I just couldn’t be more proud of how we’ve supported the Public Sector and FirstNet clients through their transitions during the COVID-19 pandemic and as they look to enact new solutions that may have been accelerated by it, like telehealth, remote working and other capabilities.”

ExecutiveBiz: AT&T is a key, long-time communications provider to the Department of Defense and they’ve named you as a provider for several of their 5G experiments. Can you elaborate a little on AT&T’s role in those experiments and, more generally, how you’re equipping DOD agencies with advanced capabilities?

“I’m super excited and proud of what we’re doing with the DOD. We’ve been a provider to DOD for over 100 years and it’s a great history and great relationship. We’ve invested more than $110 billion in our wireless and wireline networks during the last five years, including capital investments and acquisition of wireless spectrum and operations. We invite and help the DOD to take advantage of our network investments as they modernize their infrastructure and capabilities using commercial network capabilities. We are ‘all in’ with the DOD.

The entirety of AT&T is fully committed to our success in the Public Sector, FirstNet and the DOD. As such, we are excited to be a key participant in DOD 5G experiments. We are participating in 5G experimentation of various types with DOD, helping them explore “the art of the possible” and innovating new use cases at Joint Base Lewis-McChord, Naval Base San Diego, and Nellis Air Force Base.

We’re also delivering Networking-as-a-Service capabilities at Nellis, along with Buckley Air Force Base and Joint Base Elmendorf-Richardson. And, we’re working with the Air Force to transform Tyndall Air Force Base, which suffered catastrophic damage from Hurricane Michael, into a Base of the Future. It is on its way to becoming a newly transformed, state-of-the-art air base.

Our mission to support firefighters, law enforcement and security personnel with FirstNet extends to the Army with 72 Army installations across the United States and Puerto Rico now preparing to access FirstNet to aid public safety communications collaboration on-base and across to first responders in their local communities.

I am really excited about the future and what the DOD can accomplish with our capabilities.”

ExecutiveBiz: Speaking of FirstNet, following the recent contract wins and continued growth of FirstNet, what are your expectations and goals for the rest of 2021 and beyond?

Our commitment to FirstNet is secured by a 25-year contract with the FirstNet Authority but FirstNet is much more than that to us; it has become a priority mission for us. Our FirstNet commitment is guiding our entire company and how we prioritize and shape things.

As of April of this year, we have over 16,000 public safety agencies on FirstNet and cover more than 99% of the U.S. population with FirstNet using Band 14 and all AT&T LTE bands. We’ve delivered 2.71 million square miles of FirstNet LTE coverage nationwide, providing a unique and dedicated spectrum to first responders to help them deliver their missions.

We’re really excited and proud of what we’ve been able to do to support first responders and the entire public safety community.”

Author MacyPosted on July 6, 2021September 14, 2021
TOKYO (AP) — The Tokyo Olympics, already delayed by the pandemic, are not looking like much fun: Not for athletes. Not for fans. And...
Read More

Author adminPosted on November 26, 2021November 22, 2021
Pete Pflugrath, senior vice president of Markets & Growth for LMI, recently spoke with ExecutiveBiz for his first Executive Spotlight interview with the publication. During the...
Read More

Author adminPosted on October 22, 2021October 21, 2021
Keith Nakasone, a federal strategist with VMWare, recently participated in the latest Executive Spotlight interview for ExecutiveBiz covering the former GSA official’s move to...
Read More
NEWS
Author JessicaPosted on September 9, 2021September 14, 2021
COVID-19 cases and hospitalizations are on the rise again in South Dakota, although hospital officials say they’re still holding their own on capacity. The...
Read More