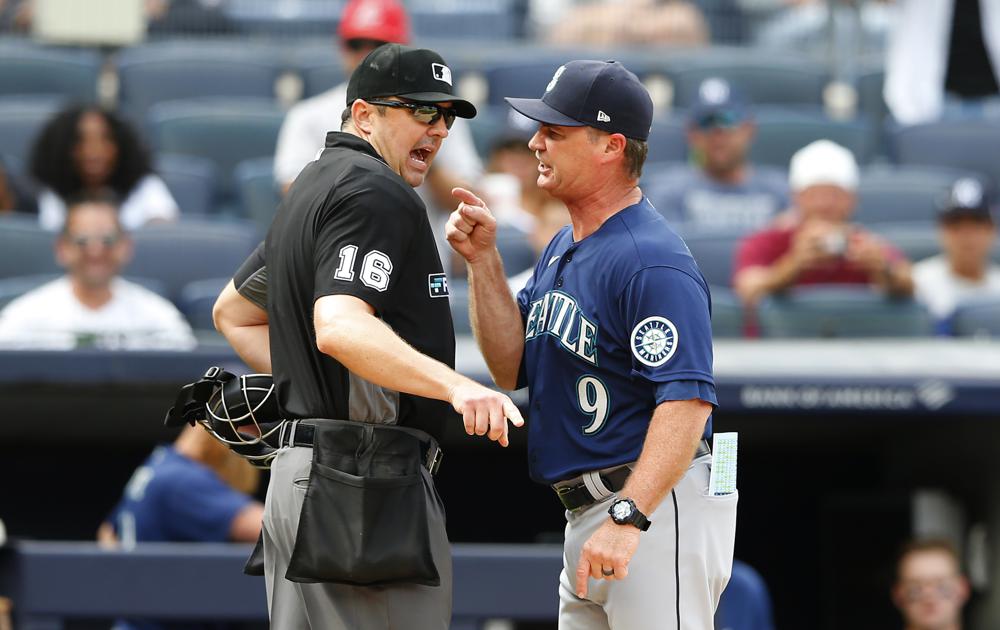 Jerry Dipoto and Scott Servais will get a chance to see whether the Seattle Mariners’ years-long rebuilding will come to fruition.

The Mariners promoted Dipoto to president of baseball operations and signed Servais to a multiyear contract extension Wednesday, keeping the pair locked together to oversee the completion of the overhaul that began three years ago.

“We certainly haven’t accomplished our goals, but we’re making great progress,” Dipoto said. “And when we laid that out with a vision, we did lay out a timeline again and hopefully we’ve done our jobs delivering on that timeline.”

Both deals had been expected and come with the Mariners chasing a playoff spot in the American League. Seattle has the longest postseason drought of any team in the four major North American sports leagues, last reaching the postseason in 2001.

Dipoto, who also received a multiyear extension as part of his promotion, has rebuilt the Mariners’ farm system with a bevy of top prospects, some of whom have become contributors this season. He’s also made some deft moves in free agency and in trades to build one of the most reliable pitching staffs in the AL and unearthed a few key additions to the everyday lineup.

Servais has helped make the mixture of prospects and established veterans work on the field. Seattle entered play on Wednesday 7 ½ games behind Houston in the AL West, but only 3 ½ behind Boston in the wild-card race.

Dipoto and Servais have worked in tandem in Seattle since they were hired by the Mariners after the 2015 season. But they have been together even longer. Dipoto hired Servais as his assistant in 2011 when Dipoto was the GM of the Los Angeles Angels.

The Mariners have gone 419-422 under their leadership. This season, Seattle is on pace for its third winning season with the pair in charge.

The duo also mark a level of continuity that’s been rare in Seattle’s history. Dipoto is the longest-serving Mariners general manager since Woody Woodward from 1988-1999. Servais is Seattle’s longest-tenured manager since Lou Piniella’s run from 1993-2002 and is already second in franchise history in victories.

Seattle went through eight managers or interim managers between 2003 and 2015.

“Jerry is the architect of that plan. Scott is the executer of that plan, and it’s essential to keep that group, that team, Jerry and Scott in place in order to realize the objective that we all have,” Mariners chairman John Stanton said.

Dipoto was given complete control over baseball operations in the spring after the team parted ways with former president and CEO Kevin Mather, who became embroiled in a controversy over insensitive remarks that became public. Stanton said he’s had a chance to work more directly with Dipoto during the past five months since Mather was fired and expects that to continue in the future.

Seattle’s rebuild started after the 2018 season. Dipoto traded Robinson Cano and James Paxton and opted not to re-sign Nelson Cruz in free agency, landing the likes of Jarred Kelenic, Justin Dunn and Justus Sheffield in trades, and chose to focus on restocking the Mariners’ farm system. Seattle is regarded as having the top farm system in baseball with top prospects Julio Rodriguez, Emerson Hancock, George Kirby and Noevli Marte in the pipeline.

“It’s less heavy lifting and a lot more fun today than it might have been three years ago,” Dipoto said.

Along with the prospects, the success of this season positions Seattle to supplement the roster in free agency and go into next season with the expectation of contending in the AL West.

“We really have one thing to get accomplished and that’s win. That’s really what it’s about,” Servais said. “Getting the most out of our players, enjoying watching them grow and thrive and get better in this game. But at the end of the day it’s about winning, and that’s the goal and I think we’ve set ourselves up to have that opportunity.”

Do we need humans for that job? Automation booms after COVID

Author LoriPosted on August 4, 2021September 14, 2021
MANILA, Philippines (AP) — The rewards, the citations and the nationwide parties are going to have to wait, for a week or so anyway....
Read More

China keeps virus at bay at high cost ahead of Olympics

Author adminPosted on September 25, 2021September 23, 2021
The Beizhong International Travel Agency in the eastern city of Tianjin has had only one customer since coronavirus outbreaks that began in July prompted...
Read More

Author adminPosted on October 21, 2021October 21, 2021
More than a dozen European nations are considering the option of last resort in the fight to prevent biennial World Cups: quitting FIFA, according...
Read More