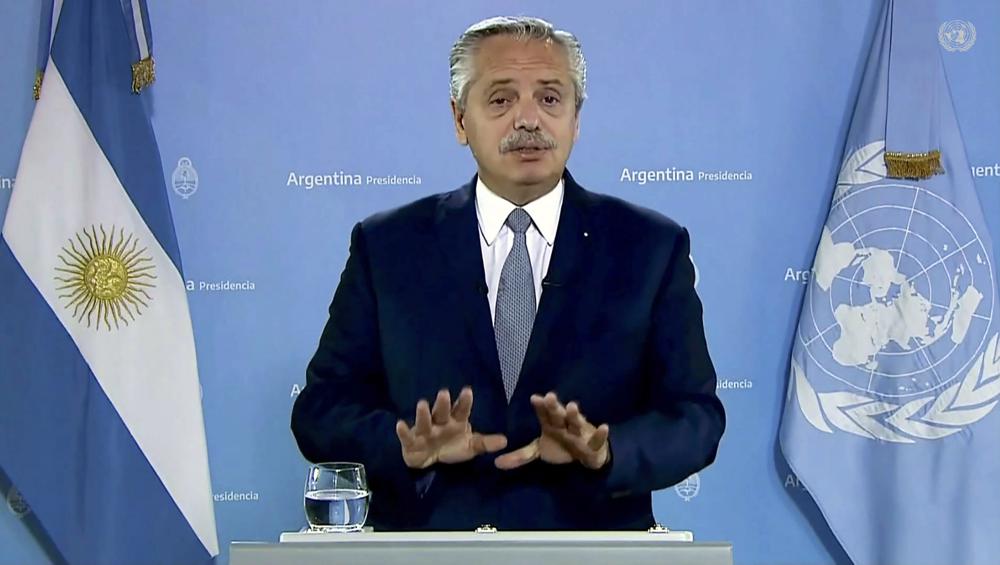 The presidents of Argentina and Colombia warned the U.N. General Assembly that increasingly strapped emerging markets could default on their foreign debts, and called on multilateral lenders to push for changes that ease conditions.

Argentina’s Alberto Fernández said in a video message there is clearly “risk of a generalized debacle of foreign debts for developing nations,” and said there should be a “reconfiguration of global financial architecture.”

Hours earlier, his Colombian counterpart Iván Duque told diplomats assembled in New York that governments increased their indebtedness and fiscal deficits to cope with COVID-19, but credit ratings agencies still evaluate them with “pre-pandemic eyes.” He called on multilateral lenders to create a new consensus on acceptable minimum risk criteria that reflect the post-pandemic reboot period.

“Otherwise, in the short term, in the face of demand for debt and generalized increase in the cost of capital, it could precipitate a debt crisis,” Duque said.

He also proposed excluding all expenses and investments directed toward climate change from the assessment of fiscal deficits.

Fernández, for his part, called Argentina’s indebtedness to the International Monetary Fund “toxic and irresponsible.” His predecessor, Mauricio Macri, arranged a $57 billion loan that Fernández has previously said was unpayable. His country has received $45 billion of the total, and the president refused to accept the remainder.

Johnson, who is due to meet Biden at the White House on Tuesday, said the U.S. government was “passionately committed to fixing climate change.”

Johnson is due to host a United Nations climate conference in Glasgow in November, and has been using a visit to the U.N. General Assembly in New York this week to urge nations to contribute more to help poor countries tackle the crisis.

Britain welcomed Biden’s announcement Tuesday that the U.S. would double its contribution.

Johnson downplayed the likelihood of a U.S.-U.K. trade deal being struck soon, saying this week that Biden had “a lot of fish to fry.”

Johnson, a long-time backer of Brexit, has often cited the chance of a deal with the U.S. as one of the key benefits of leaving the European Union. But talks have stalled, and the U.S. has warned there will be no trade deal unless Britain resolves post-Brexit tensions with the EU over Northern Ireland that some fear could undermine the peace process there.

“I have plenty of reason to be optimistic about (a trade deal),” Johnson said during interviews in New York on Tuesday with British broadcasters. “But the Americans do negotiate very hard.”

The new deal that also included the United Kingdom led Australia to cancel previous submarine acquisitions from France, which then recalled its U.S. ambassador. The deal has widely been seen as an effort by the U.S., Britain and Australia to counter an increasingly assertive China.

The pair are meeting on the sidelines of the U.N. General Assembly.

Morrison did not address the submarines issue directly, but thanked Biden for his leadership in the region. Biden says their goal is a “free and open” Pacific region and emphasizes that the U.S. has “no closer or more reliable ally” than Australia.

Biden says that their conversation will continue Friday in a meeting with Japan and India, the other two members of a separate partnership known as the quad.

Solih’s foreign minister, Abdulla Shahid, is presiding over the U.N. General Assembly. Addressing him, Solih said Tuesday that it was apt his tenure is called “the Presidency of Hope.” But he cautioned that hope without action is ineffective.

The Maldives is highly reliant on tourism for its economy, and was accordingly devastated by the coronavirus pandemic. While its borders have reopened, Solih said the virus remains a threat as long as it’s not defeated everywhere. He touted vaccines, saying 85% of all Maldivians are vaccinated.

Climate change threatens to wipe out the small Indian Ocean island nation, and Solih brought with him pleas written by young children to protect their home. He said that 56 years since Maldives “made haste” to seek U.N. membership, he still believes the world body is the best hope for humanity.

UNITED NATIONS — President Joe Biden is appealing to delegates to the U.N. General Assembly for action on climate change. He says the situation is at a “code red for humanity.”

Biden says the world is “fast approaching a point of no return” with regard to extreme weather events that are taking lives and costing billions of dollars in damage. He says every nation must “bring their highest possible ambitions” to an upcoming global climate conference in Glasgow, Scotland, that he plans to attend.

Biden says he’s working with the U.S. Congress on climate investments and encouraged other leaders to work with their governments, too, saying it will help create good-paying jobs for their citizens.

The address is Biden’s first to the U.N. General Assembly.

Biden says the U.S. is looking forward after recently turning the page on 20 years of war in Afghanistan.

Biden opened by addressing the challenge and loss facing the world from COVID-19 and he appealed to delegates to address climate change.

Biden is delivering the speech at a difficult time in his still new presidency after the chaotic U.S. withdrawal from Afghanistan and a new deal with Australia and the United Kingdom that has angered France, one of America’s oldest European allies.

Biden told delegates he will outline how the U.S. intends to work with partners and allies to help lead the world toward a more prosperous future for all people.

“To deliver for our own people, we must also engage deeply with the rest of the world.” he said.

UNITED NATIONS — The United Nations chief is warning global leaders that the world has never been more threatened and divided and “we face the greatest cascade of crises in our lifetime.”

Secretary-General Antonio Guterres rang the alarm in his annual state of the world speech at Tuesday’s opening of the U.N. General Assembly’s annual high-level meeting for leaders of its 193 member nations.

“We are on the edge of an abyss — and moving in the wrong direction,” he said.

What's the Real Difference Between Leadership and Management?

Author adminPosted on August 24, 2021August 25, 2021
ExecutiveBiz had the chance to speak with Stephanie Mango, president of CGI Federal, to talk about upbringing around the federal sector and her career...
Read More

Author JessicaPosted on July 6, 2021September 14, 2021
BOSTON (AP) — The single biggest ransomware attack yet continued to bite Monday as more details emerged on how a Russia-linked gang breached the...
Read More

Author adminPosted on December 7, 2021December 7, 2021
Robert Dapkiewicz, senior vice president and general manager for MetTel, recently spoke with ExecutiveBiz for his latest Executive Spotlight interview regarding the launch of the...
Read More