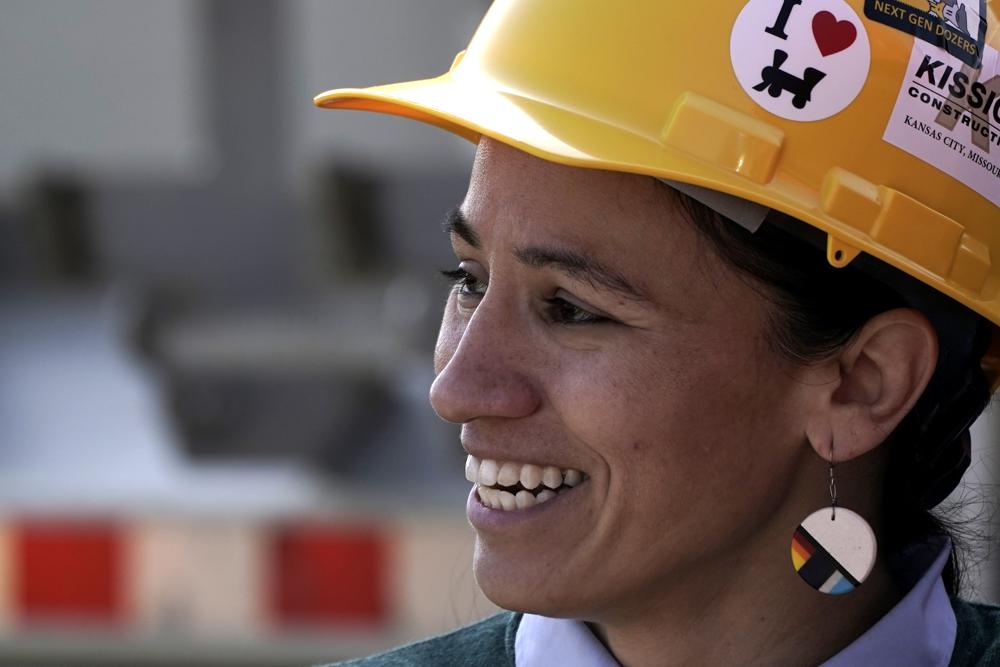 Traffic whizzing behind her, Rep. Sharice Davids gathered reporters at a transportation facility along U.S. 69 in eastern Kansas this week to celebrate the surge of federal money headed in her state’s direction.

The massive infrastructure package passed last week means $2.6 billion for Kansas roads — some of the largest investments in them since President Dwight D. Eisenhower, once a Kansan himself, supported the construction of the national highway system in the 1950s.

“I think that a lot of us recognize, just like President Eisenhower did, that infrastructure is a key to long-term economic growth,” said Davids, who proudly declared herself a “born-again transportation enthusiast.”

Davids is hardly the only member of her party celebrating. With their narrow control of Congress at stake in 2022, Democrats across the country are donning hard hats and staging photo ops near bridges to highlight long-neglected public works projects set to spring to life thanks to the more than $1 trillion plan.

It’s an attempt to move past months of infighting between progressives and moderates and unite around a shovel-ready approach to kicking the post-coronavirus pandemic economy into high gear.

For Democrats like Davids, facing tough reelection fights, the public works bonanza may be their ticket out of political peril — a potential boon with moderate and independent voters who turned against the party in last week’s elections in New Jersey and Virginia and who will decide races in most swing districts next year.

“Now is the time to turn the corner,” said New York Rep. Sean Patrick Maloney, Democratic Congressional Committee chairman. “There’s enough blame to go around, but we have achieved a huge win for working and middle-class people.”

Among those Maloney blames for the current climate is President Joe Biden, who Maloney says has failed to properly promote what’s already been achieved.

“I think my colleagues on Capitol Hill are desperate to follow the president, but we need him to lead and he needs to use that extraordinary voice that he has,” Maloney said, recalling Biden channeling his working-class Pennsylvania roots on his way to winning that state and the presidency last year. “We want Scranton Joe out there explaining this blue-collar blueprint to grow the American economy and we will follow him.”

The White House says Biden will aggressively sell his party’s legislative accomplishment. The president traveled to the Port of Baltimore on Wednesday to tout the package, though he acknowledged it would not quickly ease the rising inflation or supply chain issues weighing on the economy: “We still face challenges and we have to tackle them,” he said.

Maloney said he wants more. He called for Biden to use a nationally televised address to cheer the measure, coupled with 25 visits around the country for himself and an equal number for Vice President Kamala Harris to promote popular public works projects it will fund. Maloney also wants to see House Democrats stage more than 1,000 of their own events to do the same, backed by a $10 million Democratic National Committee advertising buy to explain the plan to the public.

The goal isn’t just detailing the package, but wielding it as a cudgel over congressional Republicans — all but 13 of whom voted against it. The Democratic Congressional Campaign Committee says it plans to “weaponize” the infrastructure plan — praising it while attacking Republicans facing their own close reelection fights next year for opposing it.

Infrastructure spending has broad bipartisan support in polling, but House Republicans argued the bill was packed with Democratic priorities beyond road repairs and bridges.

Still, former President Donald Trump seemed to acknowledge the political potential for Democrats this week when he blamed Republicans who backed the measure for voting “for Democrat longevity.” Many who did have faced sharp criticism from constituents; Michigan Rep. Fred Upton said he and his family had received death threats.

Democrats report that the reaction back home has been the opposite. In New Jersey, Rep. Josh Gottheimer said he received a high-five when he walked into a diner Monday.

Gottheimer, a top GOP target next year, led an effort by House moderates to ensure the infrastructure bill passed even as his progressive colleagues pushed for more immediate action on a separate, larger social spending plan dubbed “Build Back Better.” Now he’s is pushing colleagues to promote the pieces voters can relate to — expanding a tunnel known as Gateway, a commuter rail line under the Hudson River that links his state and New York City, or fixing the state’s roads.

“You actually have to explain it to people. It can’t be a number. It has to be about how it affects their lives,” he said. He added with a laugh, “If you talk to anyone who’s from Jersey, you get the tire insurance because you’re always getting flat tires from hitting potholes.”

Rep. Jennifer Wexton, D-Va., said the legislation “is going to be huge” for “the daily commutes and the daily lives” of her constituents, noting that the package could help further expand Metro train service in her exurban territory west of Washington. It could also bolster internet service in areas where families sometimes had to drive to libraries to access broadband — despite being only around 50 miles (80 kilometers) from the nation’s capital.

Republican Glenn Youngkin won Virginia’s governorship in an upset last week, and his party could take control of the state House depending on the outcomes of two races apparently headed to recounts. Youngkin’s Democratic opponent, Terry McAuliffe, had suggested in vain that Democrats should act more quickly to pass the infrastructure bill.

“I don’t know what it would have done,” Wexton said of whether that would have changed the results. “Obviously, it was not ideal not to have it passed.”

Now at home on recess, vulnerable Democrats are emphasizing the local projects that could mean improved quality of life — and jobs. In Michigan, Democratic Rep. Elissa Slotkin praised the plan alongside labor union members this week, noting that $1.3 billion can be used to replace pipes in a state that has seen communities struggle with lead in tap water.

Even as they sell the bill, some Democrats remain focused on the next priority. They want approval of Biden’s even bigger $1.85 trillion measure, which is designed to dramatically expand federal spending for social programs, child care and climate change mitigation — but has yet to clear Congress.

That was part of Rep. Cindy Axne’s message to renewable fuel advocates at a western Iowa ethanol plant this week. The Democratic congresswoman has secured funding for renewable fuels, a major industry in her district, in the second spending package.

In Minnesota, Rep. Angie Craig, a Democrat representing swing suburbs outside the Twin Cities, described the infrastructure plan as equally a jobs and public projects plan. But she, like Axne, noted that Biden’s broader proposal might register more with voters.

How Leaders Can Do The Essential Work Of Our Time, Rescue Their Companies And Revitalize Themselves

Author adminPosted on September 24, 2021September 23, 2021
The presidents of Argentina and Colombia warned the U.N. General Assembly that increasingly strapped emerging markets could default on their foreign debts, and called...
Read More