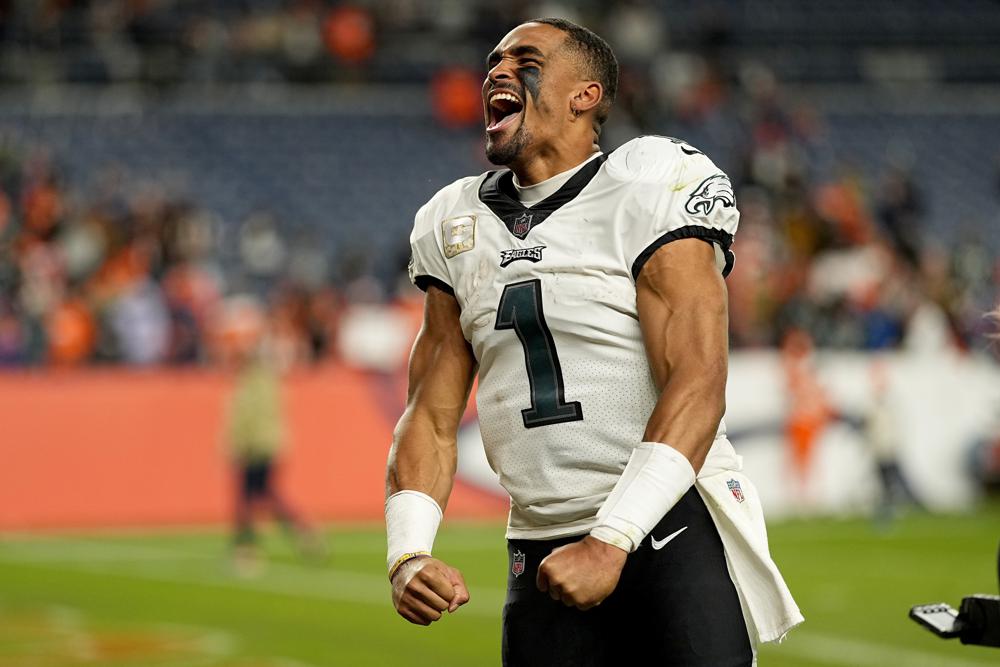 When the teams meet again Sunday at Lincoln Financial Field, the Saints (5-4) ought to have a better read on defending the mobility of Hurts, whose 18 carries for 106 yards in last year’s game remain career highs.

But New Orleans won’t exactly be facing the same 2020 rookie.

“We’ve had a lot happen since my first start,” Hurts said Wednesday. “I’m just trying to grow – grow as a player, grow as a leader, grow as a man.”

Eagles coach Nick Sirianni wasn’t present for Hurts’ starting debut – Doug Pederson ran the team then – but Sirianni said he can see the second-year pro making strides. The fundamental question for the Eagles remains whether the former Alabama and Oklahoma star can be the long-term answer at quarterback.

“What you see here now is him making great checks at the line of scrimmage to get us in and out of plays,” Sirianni said. “That’s a development as a quarterback that you want to see, because he’s your coach on the field.”

Sirianni brought up a play from Sunday’s 30-13 victory at Denver. Hurts bought time, moving around the pocket on third-and-12, assessing options before finding tight end Dallas Goedert for a 24-yard gain. As he stepped up, with pressure closing in, Hurts kept both hands on the ball until he was ready to unload.

“Forget New Orleans last year, I think three or four weeks ago, he’s going to run that football,” Sirianni said. “He might get 10 (yards), and he might shake the guy off and get 15, and he might get 20. But he got 24 when he stepped up in the pocket. And I’ve seen him with that play in the pocket, go up with one hand (on the ball). Well, I saw him (Sunday) push up with two hands, because he doesn’t know where (pass rushers might be).”

Hurts, who added that third-down conversions have been an emphasis, said: “Felt it, made the throw, moved the chains. Another day in the office.”

Hurts’ improved productivity recently has been bolstered by Sirianni’s decision to make the offense more run-oriented. Hurts attempted more than 30 passes five times in the Eagles’ first seven games, in which the team went 2-5. He hasn’t come close to hitting that number in the last three games, in which the Eagles are 2-1 — and the offensive effort was strong in the lone loss in that stretch, 27-24 to the Chargers on Nov. 7. Philadelphia ranks third in the NFL with 144.3 rushing yards per game, fourth with 4.99 yards per rush.

At Denver, Hurts had the best passing first half of his career: 15 for 20 for 176 yards and two touchdowns. Those numbers would have been even more spectacular had Quez Watkins not dropped a perfectly thrown pass in the end zone.

With a second-half lead, the Eagles leaned almost exclusively on the run. Hurts attempted only three passes, none in the final 18 minutes, after throwing an interception that was tipped by a blitzer.

Hurts might have to do more down the stretch this week to get the Eagles (4-6) past the Saints and give Sirianni his first home win in five tries. New Orleans is likely to arrive in a bad mood after taking back-to-back losses.

Hurts said one of the ways he tries to improve is by reviewing film snippets sent to him by Hall of Fame quarterback Peyton Manning. Hurts said he has maintained a strong relationship with the Mannings since he attended the Manning Passing Academy as a high school sophomore.

Notes: Running back Miles Sanders returned to practice from injured reserve Wednesday. Sirianni said Sanders is still the starter if he’s ready to go against the Saints … Goedert (concussion) did not participate in Wednesday’s walk-through practice.

Hate speech in Myanmar continues to thrive on Facebook

Author LoriPosted on August 4, 2021September 14, 2021
MANILA, Philippines (AP) — The rewards, the citations and the nationwide parties are going to have to wait, for a week or so anyway....
Read More

How Leaders Can Do The Essential Work Of Our Time, Rescue Their Companies And Revitalize Themselves

Author adminPosted on November 20, 2021November 15, 2021
Our planet is sick. People are sick. We can ignore the evidence, but we would be suffering the kind of ignore-ance that leads to...
Read More

Author MacyPosted on July 6, 2021September 14, 2021
TOKYO (AP) — The Tokyo Olympics, already delayed by the pandemic, are not looking like much fun: Not for athletes. Not for fans. And...
Read More