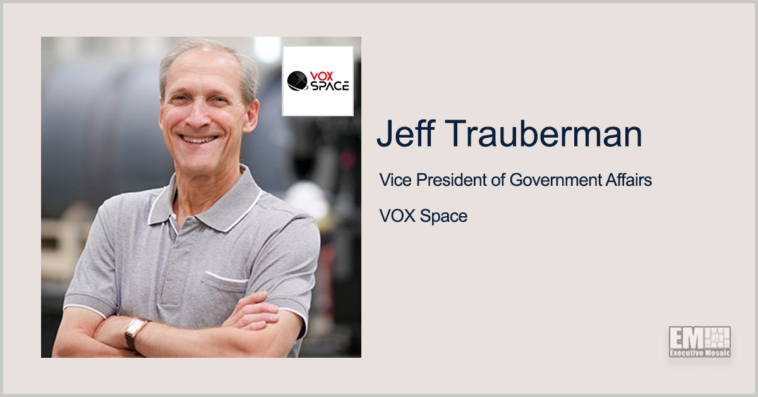 Jeff Trauberman, vice president of Government Affairs with VOX Space, recently sat down with ExecutiveBiz regarding the company’s recent growth initiatives and the challenges of expanding in the federal landscape and space domain in the publication’s latest Executive Spotlight interview.

In addition, Trauberman also discussed the collaboration of VOX Space’s capabilities with international space partners as well as the advancement of space technology, such as 3D printing and microelectronics.

“In this day and age, new capabilities can be provided through micro-electronics, new materials and new processes, such as 3D printing. These allow missions that formerly may have required a very big expensive satellite to be accomplished by a capable, but much smaller, less expensive satellite.”

You can read the full Executive Spotlight interview with Jeff Trauberman below:

ExecutiveBiz: What can you tell us about the company’s recent growth initiatives and how you’re driving value for your customers through contract awards, acquisitions and other aspects across the federal sector?

We’re the national security arm of Virgin Orbit, a responsive launch company which focuses on the launch of small satellites from a 747 aircraft. We think the availability of this ‘anytime, anywhere, unwarned’ system offers unique capabilities for the U.S. military, and various growth opportunities for our nation and allies as well.”

There are continuing threats against U.S. and allied space systems from potential adversaries such as China or Russia. We believe there’s a critical and growing need for the U.S. to develop and deploy space systems on operational timelines in the same way the military conducts its operations in the maritime, air and land domains.

It’s a highly competitive sector, with established companies in our industry, as well as new emerging companies. As a relatively new organization, we really need to distinguish ourselves in our capability offerings.

There are multiple launch companies out there, both big and small. Our particular focus has been the idea of mobility, geographic flexibility, responsiveness and being able to launch on a relatively “unwarned” basis to accomplish critical missions for our customers

The good news is that the overall ecosystem for space is rapidly growing and expanding. We’re happy to be a part of that ecosystem, along with our parent company, Virgin Orbit.  All of this is really coming together for us. The market place is shifting because traditional satellites often had very “exquisite” mission capability, which also drove them to be pretty large and expensive.

What we’re seeing in the market now is a revolution of sorts. In this day and age, new capabilities can be provided through micro-electronics, new materials and new processes, such as 3D printing. These allow missions that formerly may have required a very big expensive satellite to be accomplished by a capable, but much smaller, less expensive satellite.

As a result, we’re also seeing more proliferated constellations of smaller satellites, which really changes the market paradigm for the space sector, the ground sector and the launch sector.”

ExecutiveBiz: What are your strategic goals for the coming year? What do you hope to accomplish and any new markets that you’re keeping an eye on in the federal sector?

“Flawless execution is at the core of everything we do and is our first strategic goal. We are working in a really demanding sector and ensuring that we can actually perform and launch is so much easier said than done. Flawless execution is our top priority and I’m proud to say we completed our third successful airborne launch just this past January.

We have multiple launches on the books going forward, including another for the Department of Defense.  We’re also going to be conducting our first launch outside of the United States later this year from Spaceport Cornwall in the United Kingdom.

This will also be the first launch taking place from the United Kingdom’s sovereign territory and represents a huge step forward for one of our closest allies. They have a great space program in the U.K., but they just don’t have launch capabilities, and this allows them to get an instant indigenous and mobile capability.

We’re also working to demonstrate the benefits of the military launching and deploying satellites on operational timelines as a significant part of our strategy. The other military domains–land, sea and air–are used to conducting military operations that may be required on very short tactical timelines–for example, deploying troops, ships or aircraft to a specific place during a crisis.

That hasn’t really been the model yet for the space sector.  So we’re maturing the ability to deploy satellites on operational timelines to highlight how this can benefit our military customers.

As we continue in that direction, we’re also developing some tabletop exercises and demonstrations where we would show the value of doing these types of rapid responsive missions to benefit the military. And we’re looking at derivative applications of our space launch technology.

After flawless execution and developing US responsive space and adjacent markets, our next priority is expanding our launch capabilities in cooperation with our allies. As I mentioned, we’re launching a mission from the U.K. later this year.

There are quite a number of countries around the world that have space programs, but many of them don’t actually have launch programs. The ability to provide a launch capability from an allied country can be deployed on a global scale. The objective is to open space up, making space more secure and available to everyone.”

ExecutiveBiz: How have recent partnerships been able to assist your company expand its position in the federal marketplace, drive innovation and new capabilities and ultimately help complete your company’s mission?

“As I mentioned, our parent company, Virgin Orbit, is working with a number of countries such as the U.K.  They are also collaborating with Japan, starting initiatives in the Middle East and pursuing opportunities in Australia and Brazil. So we’re forming partnerships with many US allies.

The other element of partnerships is looking at collaboration to extend and expand our capabilities. We’re a launch company but there are some interesting adjacencies we’re exploring in the areas of hypersonics and missile defense. We also want to enable space solutions and other valuable services in cooperation with others. These include space domain awareness, Earth monitoring solutions and data analytics.

Finally, we’re seeking to demonstrate some end-to-end solutions in some of these disciplines, based upon ‘table top exercises’ to help decision-makers and customers capitalize on these capabilities. We’re planning to show how responsive space solutions can be employed on very rapid, operational timelines to support critical military operations.”

ExecutiveBiz: With federal agencies working to implement the latest trends in technology such as AI, 5G, cloud and many others, what are your thoughts on the success and challenges that government agencies are dealing with to stay ahead of innovation to establish the U.S. as THE global leader?

“Naturally, we want to leverage all those new capabilities. Advances in 5G and cloud computing are areas we absolutely want to embrace and utilize to provide more effective solutions to our customers.

Our customers themselves are also embracing rapid advances in space technology, such as 3D printing and microelectronics, enabling them to conduct important missions a lot more effectively, with less power and at lower costs.

You can see this in the ‘smallsat revolution’ and the meteoric proliferation of new space enterprises that focus on space, launch, ground operations and data analytics. The markets for these space capabilities and the associated investment of private capital are continuing to expand rapidly.

There are new robotic applications for developing and producing space hardware more efficiently on Earth, but there are also advances in new space-based applications, such as robotics, artificial intelligence and cloud computing, that will be developed in the future. These will be burgeoning fields in the space business.

There are also going to be some challenges ahead. Things are moving so quickly in the commercial space world that it’s sometimes hard for customers to keep up and leverage those developments.  This is particularly the case with government institutions.

Traditional government acquisition, budgeting and export control systems have been set up to be very methodical. These systems and processes have been proven and have served the country very well to date.

However, they are not very well adapted to keep pace with some of the rapid technological developments in space and other high technology sectors. Many smart people are working on this, but it remains a challenge for the government, and for the emerging space companies seeking to do business with the government.

For us, in particular, we’re looking forward to continuing our work with the military—the Space Force and the broader national security community. Potential threats in space are moving very rapidly.

We really don’t have the luxury of time to improve our capabilities incrementally, as our peers and adversaries are moving at light speed. It’s imperative for us to work together as a team to maintain US global leadership in space.”

Author adminPosted on January 5, 2022January 3, 2022
Stocks capped a quiet day of trading with modest losses Friday, even as Wall Street closed the books on another banner year. The S&P...
Read More

Author adminPosted on September 20, 2022September 19, 2022
Patrick Clancey, president and CEO of IDEMIA National Security Solutions, recently spoke with ExecutiveBiz about being appointed to his new role as well as his strategic goals to...
Read More