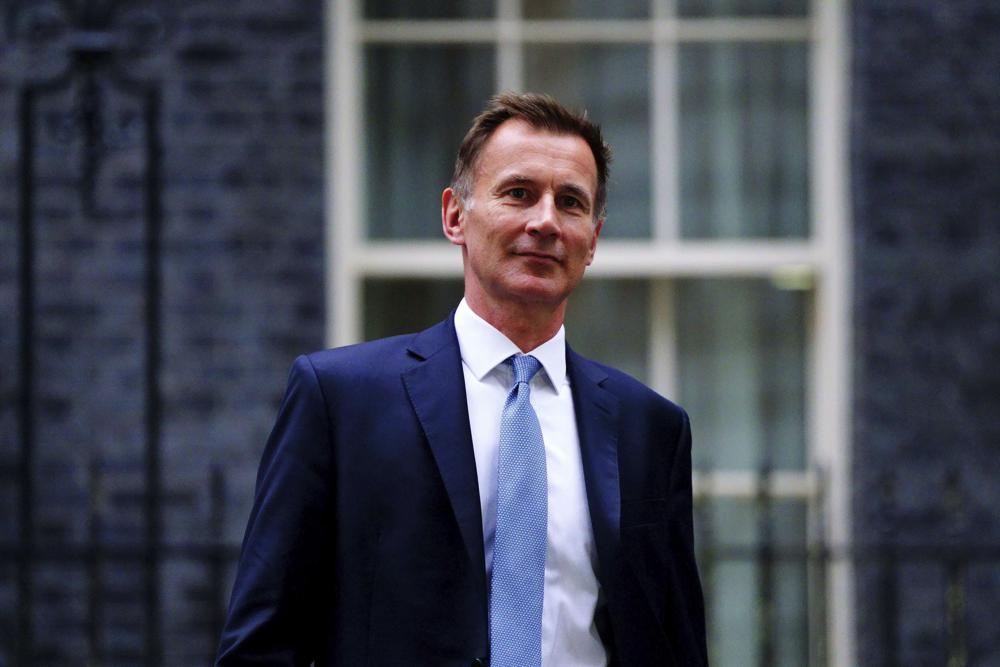 The U.K.’s new Treasury chief ripped up the government’s economic plan on Monday, dramatically reversing most of the tax cuts and spending plans that new Prime Minister Liz Truss announced less than a month ago. The move raises more questions about how long the beleaguered British leader can stay in office, though Truss insisted she has no plans to quit.

Chancellor of the Exchequer Jeremy Hunt, said he was scrapping “almost all” of Truss’ tax cuts, along with her flagship energy policy and her promise — repeated just last week — that there will be no public spending cuts.

While the reversal of policy calmed financial markets and helped restore the government’s economic credibility, it further undermined the prime minister’s rapidly crumbling authority and fueled calls for her to step down before her despairing Conservative Party forces her out.

Truss declined to attend the House of Commons to answer a question on the economy from the leader of the opposition, sending House of Commons leader Penny Mordaunt in her place. Mordaunt denied a lawmaker’s suggestion that Truss was “cowering under her desk” to avoid scrutiny.

“The prime minister is not under a desk,” Mordaunt said, words hardly likely to inspire confidence in the leader who only came to power last month.

Truss’ spokesman said the prime minister and Hunt had jointly agreed on the economic changes. But Hunt told Conservative lawmakers that Truss “backed him to the hilt in making difficult decisions” — suggesting he has a free hand to make policy.

With Truss sitting silently beside him, Hunt told lawmakers that he was canceling Truss’ plan to reduce the basic rate of income tax by 1 percentage point and most of her other libertarian economic policies. In a message aimed squarely at reassuring the financial markets, he said Britain was “a country that funds our promises and pays our debts.”

“And when that is questioned, as it has been, this government will take the difficult decisions necessary to ensure there is trust and confidence in our national finances,” Hunt said.

Hunt was appointed Friday after Truss fired his predecessor Kwasi Kwarteng, who spent less than six weeks in the Treasury job. Hunt is seeking to restore the Conservative government’s credibility for sound fiscal policy after Truss and Kwarteng rushed out a plan for tax cuts without detailing how they would pay for them.

Truss and Kwarteng jointly came up with a Sept. 23 announcement of 45 billion pounds ($50 billion) in unfunded tax cuts that immediately spooked the financial markets. The cuts fueled investor concerns about unsustainable levels of government borrowing, which pushed up government borrowing costs, raised home mortgage costs and sent the pound plummeting to an all-time low against the dollar. The Bank of England was forced to intervene to protect pension funds, which were squeezed by volatility in the bond market.

Over the weekend, Hunt has been dismantling that economic plan. The government had already ditched parts of its tax-cutting plan and announced it would make a medium-term fiscal statement on Oct. 31, weeks earlier than previously scheduled.

On Monday, Hunt went further. He scaled back a cap on energy prices designed to help households pay their bills. It will now be reviewed in April rather than lasting two years — sweeping away one of Truss’ signature plans to help Britons facing a cost-of-living crisis as food, fuel and mortgage prices soar.

Hunt told lawmakers that the measures he announced would save 32 billion pounds a year, but that spending cuts were also coming.

“There remain, I’m afraid, many difficult decisions to be announced” in the fuller budget statement on Oct. 31, he said.

Hunt also said he was setting up a new Economic Advisory Council of economists and investment bankers to help inform policy — a far cry from Truss’ bid to throw out economic “orthodoxy.”

The pound rose more than 1% to above $1.13 in London after Hunt’s announcements. That pushed the U.K. currency back above where it was trading on Sept. 22, the day before Kwarteng announced the tax cuts.

Yields on 10-year government bonds, an indicator of government borrowing costs, fell to 3.947% from 4.327% on Friday. It was 3.495% on Sept. 22. Bond yields tend to rise as the risk of a borrower defaulting increases.

Paul Johnson, director of the Institute for Fiscal Studies think tank, said Monday’s announcements would not be enough “to undo the damage caused by the debacle of the last few weeks. But they are big, welcome, clear steps in the right direction.”

The financial fiasco has turned Truss into a lame-duck prime minister. She took office just six weeks ago after winning a party election to replace Prime Minister Boris Johnson, who was forced out in July after ethics scandals ensnared his administration. Many Conservatives now believe their only hope is to replace Truss — but they are divided about who should take over.

In a BBC interview, Truss conceded that she had made mistakes. But, she vowed, “I will lead the Conservatives into the next general election.”

Few believe that possible. The Conservative Party still commands a large majority in Parliament, and — in theory — has two years until a national election must be held. Polls suggest holding an election now would be a wipeout for the Tories, with the Labour Party winning a big majority.

Labour Party economics spokeswoman Rachel Reeves said Truss was “barely in office, and she is certainly not in power,” and claimed the Conservatives could not fix the problems they had caused.

“The truth is an arsonist is still an arsonist, even if he runs back into the burning building with a bucket of water,” she said.

“I think markets in some ways would rather things just stayed as they are for a while,” he said. “OK, the PM has found her authority quite truncated. But at least you’ve got the chancellor in place almost running the country.

“I think they’re quite content with that slightly odd state of affairs, for the moment.The U.K.’s new Treasury chief ripped up the government’s economic plan on Monday, dramatically reversing most of the tax cuts and spending plans that new Prime Minister Liz Truss announced less than a month ago.

Author JosephPosted on October 6, 2022October 5, 2022
The U.S. military is looking into the future of 5G and succeeding broadband network generations to fortify its defense operations, Axellio CEO Scott Aken said in a podcast aired...
Read More

Author MarkPosted on November 11, 2022November 8, 2022
Executive Mosaic, the government contracting industry’s premier media, membership and events organization, is excited to recognize 10 executive recruiters who have distinguished themselves through...
Read More