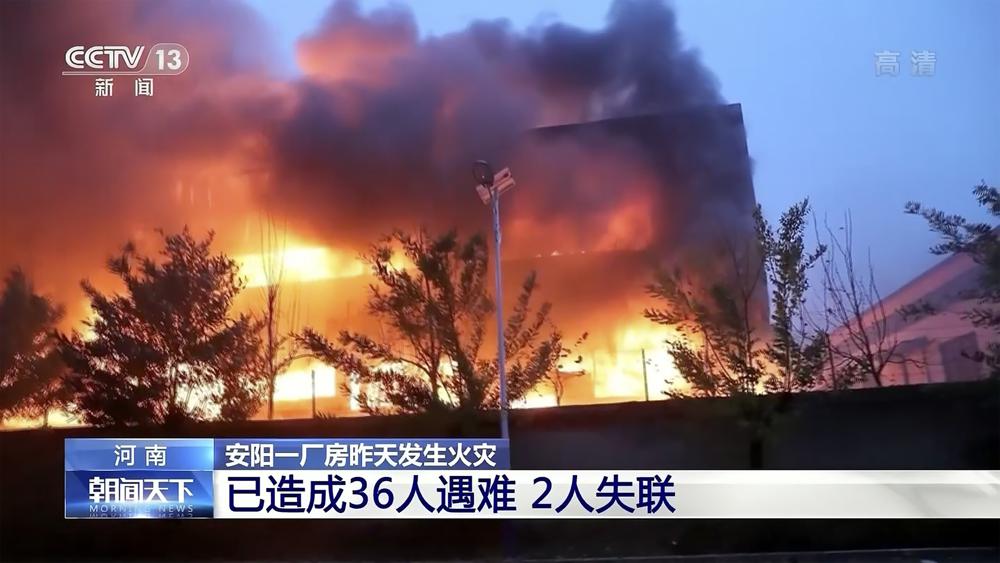 A blazing fire has killed 38 people at a company dealing in chemicals and other industrial goods in central China’s Henan province.

Two other people were injured, the local government in part of Anyang city said in a statement Tuesday.

The fire was reported about 4:30 p.m. Monday and took firefighters about 3 1/2 hours to bring under control, the Wenfang district government said.

Video footage on state broadcaster CCTV showed flames and smoke billowing out of what appeared to be a two-story building that was engulfed by fire. In nighttime shots, firefighters examined the scarred, skeletal remains of the structure with an extension ladder and lights.

No word was given on the cause of the fire or how so many employees were killed, although China has a history of industrial accidents caused by lax regard to safety measures fueled by rising competition and abetted by corruption among officials. Poor storage conditions, locked exits and a lack of firefighting equipment are often cited as direct causes.

Online listings for the company, Kaixinda, said it was a wholesaler dealing in a wide range of industrial goods including what was described as specialized chemicals.

A massive 2015 explosion at a chemical warehouse in the northern port city of Tianjin killed 173 people, most of them firefighters and police officers. The chemicals were found to be falsely registered and stored, with local officials found complicit in turning a blind eye to the potential threat.

More than 200 search and rescue workers and 60 firefighters responded to the Henan fire, according to the statement.

The densely populated and economically vital province has seen a number of deadly incidents leading to the arrest of local officials.

Five were arrested after a building collapse that killed 53 people on the outskirts of the provincial capital Changsha in April.

Walmart to launch delivery service for other businesses

EU proposes to suspend billions in funds to Hungary

Author adminPosted on September 19, 2022September 19, 2022
The European Union’s executive branch recommended Sunday that the bloc suspend around 7.5 billion euros (dollars) in funding to Hungary over concerns about democratic...
Read More