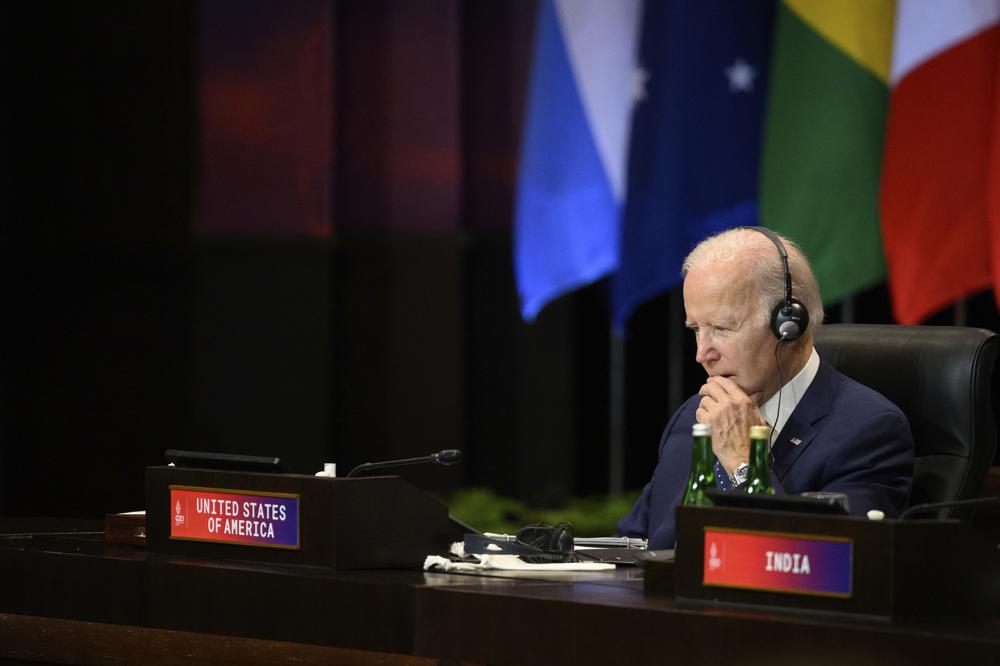 Ukrainian President Volodymyr Zelenskyy joined U.S. President Joe Biden in trying to persuade other leaders of the world’s largest economies to further isolate Russia diplomatically and economically over its invasion of Ukraine, despite a souring global financial outlook that has tested many nations’ resolve.

The call to stand up to Russia and defend Ukraine’s sovereignty in both symbolic and substantive ways came Tuesday at the meetings of the Group of 20 summit in Indonesia.

Inflation and slowing economies are weighing on several of the countries that imposed penalties on Russia for starting the nine-month war. Higher costs for energy and food have destabilized business activity around the world, as much of Europe prepares to brave the winter without imports of Russian natural gas.

In opening the summit, Indonesian President Joko Widodo impressed on the gathering what’s at stake.

“If the war does not end, it will be difficult for the world to move forward,” Widodo said. “We should not divide the world into parts. We must not allow the world to fall into another cold war.”

In a video address, Zelenskyy reiterated 10 conditions for ending the conflict that began in February, among them a complete withdrawal of Russian troops and full restoration of Ukrainian control of its territory.

“Ukraine should not be offered to conclude compromises with its conscience, sovereignty, territory and independence,” he said. “Ukraine has always been a leader in peacekeeping efforts, and the world has witnessed it. And if Russia says that it supposedly wants to end this war, let it prove it with actions.”

A senior U.S. administration official, speaking on the condition of anonymity to discuss the summit, said Tuesday that the summit’s final communique will make clear that “most” of the nations condemn Russia’s invasion in Ukraine and the toll it has taken on global food and energy supplies.

It’s unclear how many nations would embrace the tough language or whether the document would refer to Russia’s actions as a “war” — a phrase Moscow has sought to avoid, despite the devastating losses inflicted and sustained by its military.

The European Council president, Charles Michel, urged other global powers to intensify pressure on Russia over its war against Ukraine, including Moscow’s biggest supporter, China. Michel said Tuesday that the summit was crucial to stopping Moscow’s push “to use food and energy as weapons.”

The U.S. and its allies responded to Russia’s invasion of Ukraine with export controls and other sanctions, making it harder for Russia’s military to access key technologies and resupply with drones, artillery and other weapons.

Chinese President Xi Jinping said to the G-20 that the global economy should not on principle be weaponized.

“We must resolutely oppose the attempt to politicize food and energy issues or use them as tools and weapons,” Xi said in translated remarks. “Unilateral sanctions must be removed, and restrictions on relevant scientific and technological cooperation must be lifted.”

U.S. officials have said Biden’s trip has demonstrated that countries large and small are willing to condemn Russian aggression. Russian President Vladimir Putin has stayed away, sending his foreign minister, Sergey Lavrov. The Indonesian president invited Ukrainian President Volodymyr Zelenskyy to virtually address the G-20 summit, just days after Ukraine’s foreign minister was invited to participate in the Association of Southeast Asian Nations summit in Cambodia, where it became the latest signatory to the group’s treaty of amity and cooperation.

Chinese officials have largely refrained from public criticism of Russia’s war, although Beijing has avoided direct support of the Russians, such as supplying arms. Biden said he and Chinese President Xi Jinping discussed Russia’s aggression in a meeting Monday and “reaffirmed our shared belief” that the use or even the threat of nuclear weapons is “totally unacceptable” — a reference to Moscow’s thinly veiled threats to use atomic weapons as its invasion of Ukraine has faltered.

The summit schedule does not include a “family photo” of leaders, which would avoid a potentially awkward moment of interaction with the Russian representative, Lavrov. It remained to be seen how Biden and U.S. allies would react when Lavrov is recognized to speak during the summit’s closed sessions. Some Europeans have discussed potentially walking out of the meeting to protest Russia’s invasion.

U.S. national security adviser Jake Sullivan said no one in the U.S. delegation had plans to meet with Saudi Crown Prince Mohammed bin Salman, often known as MBS, after Biden accused Saudi Arabia of siding with Russia by leading the OPEC+ cartel to cut oil production last month in a bid to sustain the elevated energy prices that Russia uses to fund its war in Ukraine.

It also was not clear whether anyone from the U.S. delegation would meet with Indian Prime Minister Narendra Modi or other leaders whose cooperation is needed to secure a price cap on Russian oil to limit the profits Moscow uses to invest in its defense base.

Sunak, who took office last month after the disastrously short tenure of Liz Truss, has promised to continue his conservative predecessors’ steadfast support for Ukraine. He and Biden are set to strategize during their Wednesday meeting on new ways to bolster Ukraine’s defenses for the long haul.

Meloni has pledged to continue to provide arms and aid for Ukraine, but questions remain over her far-right coalition’s commitment to stand up to Russia. She will meet with Biden privately on Tuesday afternoon.

One leader who will be absent is Cambodian Prime Minister Hun Sen, who tested positive for COVID-19 after his arrival in Bali and said he was returning home. So far, no other leaders are known to have tested positive, though many of those in Bali also attended meetings with Hun Sen just days ago during a summit of the Association of Southeast Asian nations.

Tottenham says Rennes game off after COVID outbreak in squad

Author adminPosted on December 4, 2021November 29, 2021
The European Union’s drug regulator on Thursday authorized Pfizer’s coronavirus vaccine for use on children from 5 to 11 years old, clearing the way...
Read More