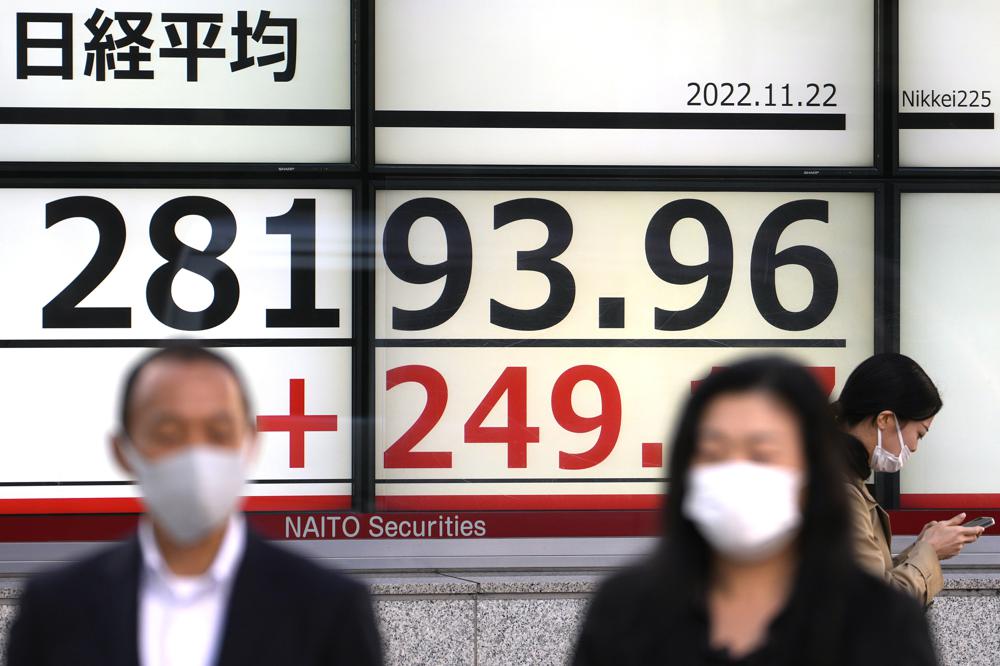 China’s increasing restrictions on millions of people in multiple cities to fight virus outbreaks are adding to concern the world’s second-largest economy might weaken.

“Fears over China’s COVID situation are putting pressure on the global outlook for demand,” Anderson Alves of ActivTrades said in a report. “Positioning for an upside for Chinese stocks will have to wait longer.”

The Dow Jones Industrial Average edged down 0.1% at 33,700.28. It was supported by a 6.3% gain for Disney after the company announced former CEO Bob Iger would return to the job.

Tesla tumbled 6.8% after briefly hitting a two-year intraday low. The electric automaker’s shares are down more than 50% this year on fears CEO Elon Musk will be distracted by his $44 billion purchase of Twitter.

Concerns about China’s economic activity rose after the major cities of Guangdong and Shijiazhuang ordered millions of residents to stay home and other cities including the capital, Beijing, closed stores and tightened restrictions on travel and other activity.

China’s ruling Communist Party promised this month to reduce the economic impact of its “zero-COVID” strategy, which aims to isolated every case, by changing quarantine and other rules. But an upsurge in cases is challenging that as cities close businesses or tell factory operators to isolate their workforce from contact with outsiders.

Casino operator Wynn Resorts, which depends on Chinese gamblers visiting the southern territory of Macao for a big share of its revenue, fell 2.2%. Las Vegas Sands, which also operates casinos in Macao, slid 2.9%.

Bond yields fell. The yield on the 10-year Treasury, which influences mortgage rates, slipped to 3.82% from 3.83% late Friday.

U.S. markets close Thursday for the Thanksgiving holiday and have a shortened trading day Friday.

On Wednesday, the Fed is due to release minutes from its latest meeting, which might give investors more insight into plans to fight inflation that is near a four-decade high.

Traders worry unusually large rate hikes by the Fed and other central banks this year might tip the global economy into a recession.

They expect the Fed to raise rates again at its December meeting but by one-half percentage point after four hikes of 0.75 percentage points, three times its usual margin.

The president of the St. Louis Federal Reserve Bank, James Bullard, dashed hopes the Fed might be easing off rate hike plans. He suggested the U.S. central bank’s key lending rate might need to rise to 5% to 7% before inflation is under control. That would be almost double the current range of 3.75% to 4%, up from close to zero in March.

In energy markets, benchmark U.S. crude gained 27 cents to $80.31 per barrel in electronic trading on the New York Mercantile Exchange. Brent crude, the price basis for international oil trading, advanced 42 cents to $87.87 per barrel in London.

3 ways to measure your leadership effectiveness

Rail strike would have wide impact on US economy

Executive Spotlight: Shawn Purvis, President and CEO at QinetiQ US

Author adminPosted on April 19, 2022April 18, 2022
Shawn Purvis, president and CEO at QinetiQ’s U.S. Group as well as a two-time Wash100 Award recipient, spoke with ExecutiveBiz about joining the company and becoming its president and CEO...
Read More

Author adminPosted on July 22, 2022July 18, 2022
Thousands more doses of monkeypox vaccine are expected to soon begin shipping to the U.S. after federal health officials said they had completed an...
Read More

Author adminPosted on September 27, 2021September 28, 2021
Britons are encouraged these days — though in most cases not required — to wear face coverings in crowded indoor spaces. But Prime Minister...
Read More