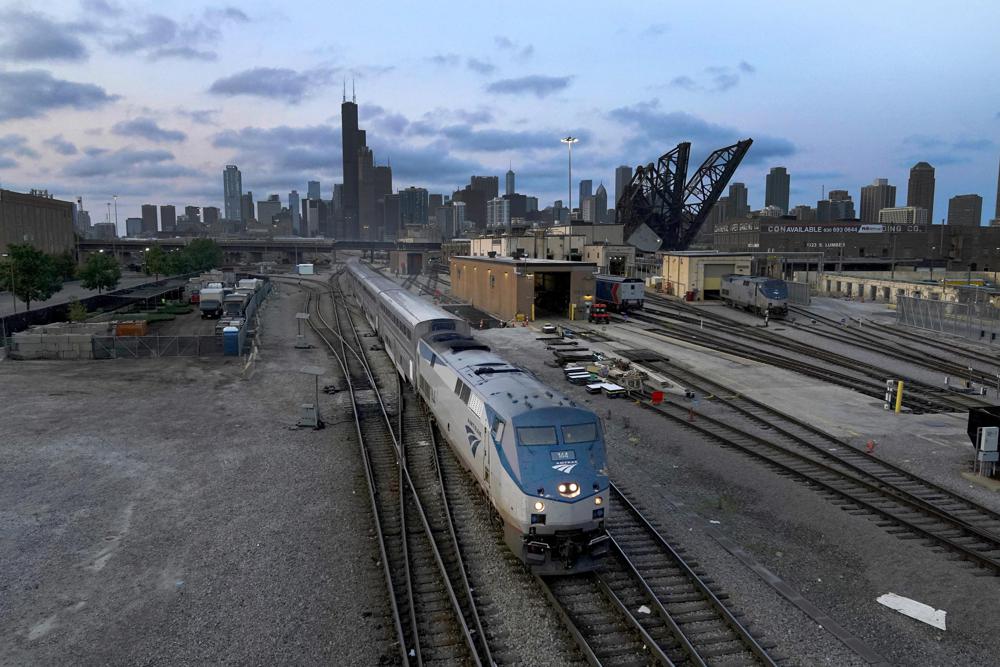 American consumers and nearly every industry will be affected if freight trains grind to a halt next month.

One of the biggest rail unions rejected its deal Monday, joining three others that have failed to approve contracts over concerns about demanding schedules and the lack of paid sick time. That raises the risk of a strike, which could start as soon as Dec. 5.

It wouldn’t take long for the effects of a rail strike to trickle through the economy. Many businesses only have a few days’ worth of raw materials and space for finished goods. Makers of food, fuel, cars and chemicals would all feel the squeeze, as would their customers.

That’s not to mention the commuters who would be left stranded because many passenger railroads use tracks owned by the freight railroads.

The stakes are so high for the economy that Congress is expected to intervene and impose contract terms on railroad workers. The last time US railroads went on strike was in 1992. That strike lasted two days before Congress intervened. An extended rail shutdown has not happened for a century, partly because a law passed in 1926 that governs rail negotiations made it much harder for workers to strike.

Here are some of the expected impacts of a rail strike:

Railroads haul about 40% of the nation’s freight each year. The railroads estimated that a rail strike would cost the economy $2 billion a day in a report issued earlier this fall. Another recent report put together by a chemical industry trade group projected that if a strike drags on for a month some 700,000 jobs would be lost as manufacturers who rely on railroads shut down, prices of nearly everything would increase even more and the economy could be thrust into a recession.

And although some businesses would try to shift shipments over to trucks, there aren’t nearly enough of them available. The Association of American Railroads trade group estimated that 467,000 additional trucks a day would be needed to handle everything railroads deliver.

Chemical manufacturers and refineries will be some of the first businesses affected, because railroads will stop shipping hazardous chemicals about a week before the strike deadline to ensure that no tank cars filled with dangerous liquids wind up stranded.

Jeff Sloan with the American Chemistry Council trade group said chemical plants could be close to shutting down by the time a rail strike actually begins because of that.

That means the chlorine that water treatment plants rely on to purify water, which they might only have about a week’s supply of on hand, would become hard to get. It would be hard for manufacturers to make anything out of plastic without the chemicals that are part of the formula. Consumers will also pay more for gasoline if refineries shut down either because they can’t get the ingredients they need to make fuel or because railroads aren’t available to haul away byproducts like sulfur.

Chemical plants also produce carbon dioxide as a byproduct, so the supply of carbon dioxide that beverage makers use to carbonate soda and beer would also be restricted, even though the gas typically moves via pipelines.

Roughly half of all commuter rail systems rely at least in part on tracks that are owned by freight railroads, and nearly all of Amtrak’s long-distance trains run over the freight network.

Back in September, Amtrak cancelled all of its long-distance trains days ahead of the strike deadline to ensure passengers wouldn’t be left stranded in remote parts of the country while still en route to their destination.

And major commuter rail services in Chicago, Minneapolis, Maryland and Washington state all warned then that some of their operations would be suspended in the event of a rail strike.

It would take about a week for customers to notice shortages of things like cereal, peanut butter and beer at the grocery store, said Tom Madrecki, vice president of supply chain for the Consumer Brands Association.

About 30% of all packaged food in the U.S. is moved by rail, he said. That percentage is much higher for denser, heavier items like cans of soup.

Some products, like cereal, cooking oils and beer, have entire operations built around rail deliveries of raw ingredients like grain, barley and peanuts, along with shipments of finished products.

Those companies typically keep only two to four days’ worth of raw ingredients on hand because it’s expensive to store them, Madrecki said, and grocers also keep a limited supply of products on hand.

Madrecki said big food companies don’t like to discuss the threat of a rail strike because of worries about product shortages can lead to panic buying.

Any disruption in rail service could threaten the health of chickens and pigs, which depend on trains to deliver their feed, and contribute to higher meat prices.

“Our members rely on about 27 million bushels of corn and 11 million bushels of soybean meal every week to feed their chickens. Much of that is moved by rail,” said Tom Super, a spokesman for the National Chicken Council, a trade group for the industry raising chickens for meat.

The National Grain and Feed Association said a rail strike now would hit pork and chicken producers in the southern U.S. hardest, because their local supply of corn and soybeans from this year’s harvest is likely exhausted and they’d have to ship feed by truck, dramatically increasing costs.

“They only have so much storage. They can’t go without rail service for too long before they’d have to shut down the feed mills and they run into problems,” said Max Fisher, the NGFA’s chief economist.

Jess Dankert, the vice president for supply chain at the Retail Industry Leaders Association, said retailers’ inventory is largely in place for the holidays. But the industry is developing contingency plans.

“We don’t see, you know, canceling Christmas and that kind of narrative,” Dankert said. “But I think we will see the generalized disruption of really anything that moves by rail.”

David Garfield, a managing director with the consulting firm AlixPartners, said a rail strike could still impact holiday items shipped to stores later in December, and would definitely hamper stocking of next season’s goods.

Retailers are also concerned about online orders. Shippers like FedEx and UPS use rail cars that hold roughly 2,000 packages in each car.

Drivers are already paying record prices and often waiting months for new vehicles because of the production problems in the auto industry related to the shortage of computer chips in recent years.

That would only get worse if there is a rail strike, because roughly 75% of all new vehicles begin their journey from factories to dealerships on the railroad. Trains deliver some 2,000 carloads a day filled with vehicles.

And automakers may have a hard time keeping their plants running during a strike because some larger parts and raw materials are transported by rail.

Author adminPosted on July 28, 2022July 25, 2022
The U.S. Supreme Court on June 24 overturned Roe v. Wade, the 1973 decision that had provided a constitutional right to abortion. The ruling was expected to...
Read More

Author adminPosted on August 18, 2022August 16, 2022
New Zealand on Friday welcomed the first cruise ship to return since the coronavirus pandemic began, signaling a long-sought return to normalcy for the...
Read More

Author adminPosted on April 3, 2022March 28, 2022
Democrats in Springfield are celebrating approval of legislation that wipes out $4.1 billion in debt. In fewer than 24 hours last week, lawmakers and...
Read More