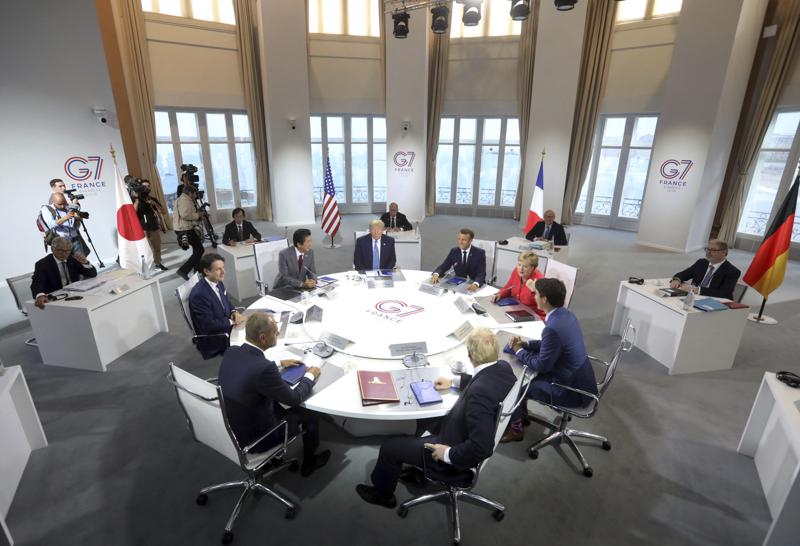 They’re the board of global democracy’s most exclusive club, and they’re meeting this week after four years of U.S. disruption and a two-year coronavirus interruption.

Already on a first-name basis with relationships that range from just months to years, the leaders of the Group of Seven industrialized democracies are gathering Friday amid hopes that the departure of their most unruly member and a new era of personal friendships enhanced by face-to-face discussions can restore a global anti-authoritarian consensus on climate, the coronavirus, China and Russia.

MORE COVERAGE OF THE G-7 SUMMIT

Trump had thrown a wrench into G-7 unity, demanding the absolute prioritization of U.S. interests, threatening decades-old security guarantees, insulting colleagues and loudly suggesting that Russian President Vladimir Putin be invited back into the group despite his refusal to meet demands for Moscow to stay out of Ukraine.

Biden aims to take a new tack. Asked about his goals upon departing from Washington, Biden replied: “Strengthening the alliance and make it clear to Putin and to China that Europe and the United States are tight, and the G-7 is going to move.”

Of the seven leaders meeting Friday in Britain’s southwest Cornwall, two are newbies. Biden and Italian Prime Minister Mario Draghi took office within weeks of each other this year.

Two others have been in power for two years or less: Britain’s Boris Johnson since 2019, and Japan’s Yoshihide Suga since 2020. Yet the other three have a long history together, some of them with Biden dating to his days in the Senate and as vice president.

Germany’s Angela Merkel will be attending her last G-7 summit before stepping down as chancellor in September after 16 years. Canadian Prime Minister Justin Trudeau has been in office since 2015 and French President Emmanuel Macron since 2017. All had famously testy relations with Trump over trade, defense spending, climate change and other issues.

Trump once accused Trudeau of being “very dishonest and weak” in the context of a G-7 summit. He frequently disparaged Merkel and Johnson’s predecessor Theresa May in similar terms and denounced Macron’s skepticism of NATO abilities as “nasty” and “insulting.” Johnson was the exception, as Trump saw him as a kindred iconoclastic spirit.

The open hostility hindered the group’s ability to present a unified front. Biden hopes to soothe those relations on his first overseas trip as president.

Since taking office, Biden has met in person with only one of his G-7 counterparts, Suga. But in virtual sessions and phone calls, he has sought to build on his personal connections with the others and has said he wants more in-person meetings.

“There’s no substitute for face-to-face discussions,” Biden told Suga when they met at the White House in April. “Those personal bonds of friendship and connection, they’re the ones that are going to keep this alliance strong and vibrant for decades to come.”

Good relations “make it easier to do business,” said Ronald Neumann, president of the American Academy of Diplomacy and a retired three-time U.S. ambassador.

“You won’t find that people will act against what they perceive as their interests just because they’re friends, but it does mean that it’s easier to have conversations to explore whether there are ways to bring interests closer together,” he said.

That didn’t happen in the Trump years. “My sense is that we were not very interested in exploring areas for compromise — we were interested in getting, or rather telling, the others to do things our way,” Neumann said.

As Biden has pursued some policies identical to Trump’s, he has met far less resistance than his predecessor did, notably winning support for the military withdrawal from Afghanistan. Just weeks before Biden announced he had decided to generally stick with Trump’s pullout plan, U.S. allies had warned against any precipitous moves.

Similarly, Biden’s reversal of Trump’s approval of the Keystone XL pipeline from Canada was met with only a muted response from Ottawa amid the new president’s outreach to Trudeau. “The United States has no closer friend — no closer friend — than Canada. That’s why you were my first call as president,” Biden told Trudeau.

On Wednesday, though, the sponsor of Keystone XL pulled the plug on the project after Canadian officials failed to persuade Biden to reverse his cancellation of its permit on the day he took office.

Biden and Macron will be meeting for the first time in person, and French officials said Macron is eager to build on discussions they have had by phone and video. A centrist, Macron did not hide that he was counting on Biden’s election to bring the United States’ positions closer to France’s over the Paris climate accord, a minimum global corporate tax and global security issues.

But, perhaps, no G-7 leader has been a greater beneficiary than Merkel, the doyenne of the group. Biden slapped a hold on Trump’s decision to reduce the U.S. military presence in Germany and used a national security waiver to avoid hitting a German company and its CEO with sanctions over a controversial pipeline.

“It’s a basic truth of foreign policy that each country has its own values and interests. But then there is of course also the hard-to-measure factor of understanding that can form between two sides’ leaders — or sometimes doesn’t form,” said Merkel spokesperson Steffen Seibert. “And of course it’s better if it does form, if one does have a common culture of dialogue, if one listens to each other, if one also tries to understand the other person’s stance and convictions.”

Johnson, meanwhile, is keen to ensure Biden remains committed to Washington-London comity, especially as he continues to seek preferential post-Brexit trade status with America that had been all but guaranteed under Trump.

Trump had praised Johnson and Britain’s withdrawal from the European Union unequivocally, calling him “Britain’s Trump.” Biden had reacted in kind as a candidate, calling the British leader a “physical and emotional clone” of Trump. Still, the British government has worked hard to overcome that impression, stressing Johnson’s common ground with Biden on issues such as climate change and his support for international institutions.

Poll: Millions in US struggle through life with few to trust

Donations for racial equity have surged. But by how much?

Author adminPosted on May 3, 2022May 3, 2022
Bill Downer, vice president of National Programs for Seagate Government Solutions and a key member of Executive Mosaic’s GovCon Expert program, recently spoke with ExecutiveBiz regarding how the U.S. rebuilds...
Read More